Dance of the water with colors 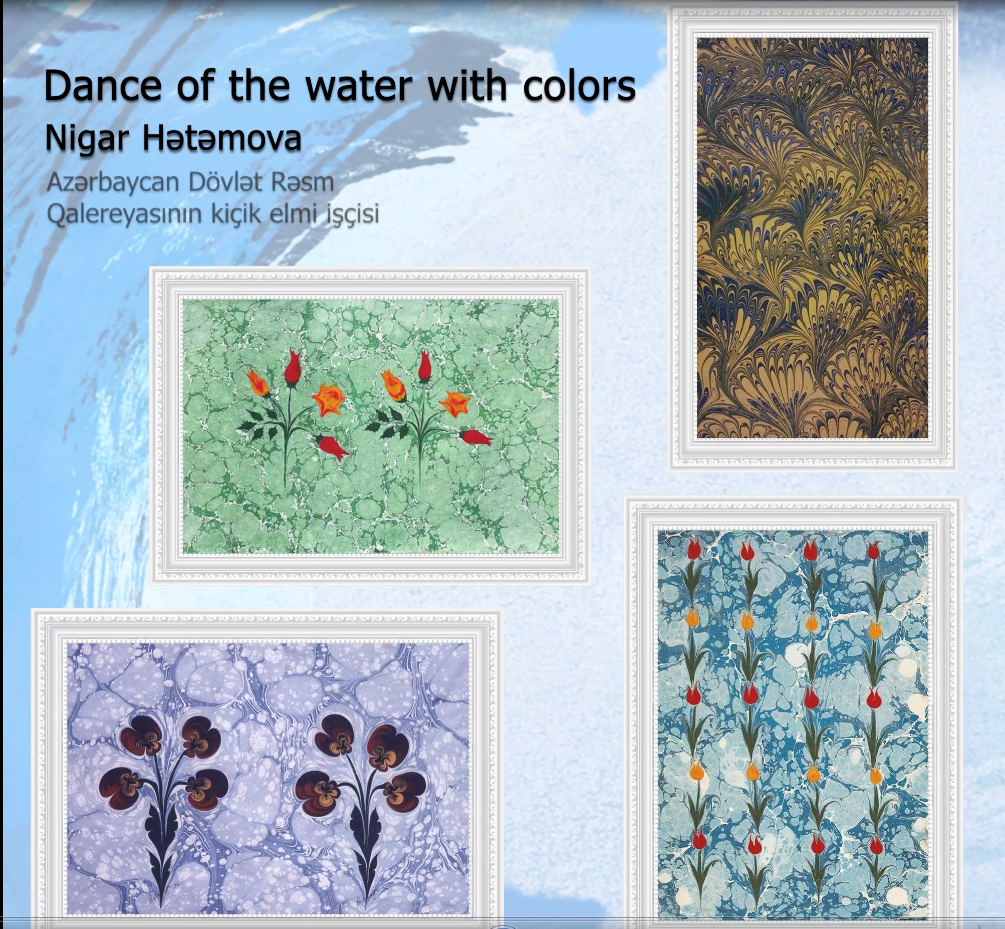 It is known exactly where and the when the art of marbling, which is defined as the dancing of colors in water, started. However, some marbling historians have opinions that the origin of marbling is based on Central Asia, Turkestan. The marbling art is one of the Turkish art technics, which is assumed to have started in Bukhara and Samarkand.

Marbling, which has been used to decorate book covers in the historical process or by transferring it to paper and framing it, can be applied to many different surfaces today.

The art of marbling has a very special and valuable place in traditional Turkish arts.

“Ebru” is an art in which the laws physics and chemistry are applied, colors dance in harmony and unison on the water and then transferred onto paper. Today, it is pleasing that the interest in this art technique is invreasing and the young artists or art lovers attracted to it. It is seen that the art of marbling is a branch of art that is constantly open to change and innovation in terms of the motifs obtained and the areas of use of marbling paper, as well as the material used in its production. Most of the marbling samples that have survived to the present day are Seljuk and Ottomon works.

It is seen that the masters of marbling, who are in the historical process of the traditional Turkish marbling art, have developed different techniques. They added a new dimension to the techniques they found and created a bridge between generations to transfer this dimension to future generations.

The materials used in the making of the art of marbling, the motifs obtained, the usage field the marbling paper and the materials it is applied to are constantly changing from the past to the present and new fields are emerging. In addition, marbling art finds new application fields in abstract painting. The application areas of marbling today include diversity. For example, it can be applied to canvas, fabric, leather, wood, tile, ceramic, glass, stone and so on materials.

Researches and artists working on the art of marbling wanted their experiments to be permanent, beyond just composition, color and visual. In this context, they have done unimaginable works.

One of the oldest forms of marbling, “Suminagashi’ is a Japanese word meaning ink painting. This art was practiced by the Japanese royal family about 800 years ago. Some researchers think that Suminagashi originated in China before Japan. This art technic has added beauty to many Eastern handicrafts such as calligraphy and paper decoration.

The marbling art has been one of the main tools for using colored papers in bookbinding and other decorative works since its entry into Europe about 2.5 hundred years ago. The marbling art played an important role in daily life in the Near East, similar to the one in Europe. The art of Marbling was matured and perfected in the Near East long before Europe and was used in the field of book binding in Islamic methods. The art of marbling has been widely used for a long time both in the east and in the west. The changes that emerged as a result of the industrial revolution in the 19thcentury led to a decline in the field of handcraft book binding. This situation also caused a decline and decrease in the art of marbling.

None of the other Turkish art technique has been so popular in Europe. On the other hand, in the 18th and 19th centuries, after the discovery of the art of marbling by the westerners, the spread of the printing press, the emergence of printing books caused the stagnation of arts such as calligraphy, binding and marbling.  Mass production, especially with special machines, has dealt a significant blow to the Turkish marbling art.

There are several types of marbling art;

Like any art, there is a lot of nuance to great marbling, from the mix of colors, to the manipulation of those colors, even to the humidity of the environment and how it affects the paints. Not only is it fun to experiment and rewarding to create such beauty, but it’s exciting to think that you can practice on art that was kept secret at all costs for hundred of years.

Today, marbling is going strong with thousands of masters who explore and revitalize the traditional methods, bringing new ideas to this wonderful form of expression.

“Ebru: Turkish Art of Marbling “ was registered on UNESCO’s Representative List of the Intangible Cultural Heritage of Humanity on behalf of Turkey in 2014.