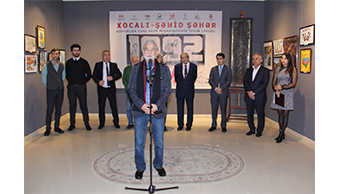 The exhibition was organized with the support of  Ministry of Culture of the Republic of Azerbaijan, the Ministry of Education of the Republic of Azerbaijan, the Azerbaijan Television and Radio Broadcasting Corporation, Khatai District Executive Power,  the Union of Azerbaijan Artists, the Nakhchivan Artists Association and with the organization Azerbaijan State Art Gallery  and Khatai Art Center.  The final exhibition of the " Khojaly - Martyr City " Republican children's drawing competition was held on February 24, 2020 dedicated to the memory of Khojaly genocide victims.The event was opened by the Secretary of the Union of Azerbaijan Artists, Professor Agaali Ibrahimov. Director of Khatai Art Center Zahid Avazov thanked the little artists for not forgetting the Khojaly genocide. Azerbaijan Honored Artist Aydın Rajabov, Honored Artist Rafael Muradov, painter Nazim Mammadbeyov, employee of the permanent representation of the Nakhchivan Autonomous Republic in Baku  Azer Rahimov also attended at the event. They stated that the Khojaly genocide is a wound in the destiny of the Azerbaijani people. The event ended with a flower laying ceremony for Khojaly monument.More than 700 children from different parts of the Republic participated with about 1300 works in the competition. Each of the 225 children were invited to attend at the event with a work. Also in the final exhibition the teacher of the Azerbaijan Academy of Art, Jalal Agayev participated  with the same title work- "Martyr City". The authors of the selected works for the exhibition and learning centers (associations, art schools, etc.) were awarded diplomas.